We wanted to breed one of our very nicest bitches to the European boys, which is where Ch SnowDowne Catch The Breeze,CGC enters the picture. Breeze is outstanding in many ways; she has all of her health clearances, has done some very impressive winning in the show ring, and is the sweetest OES girl; she is a delight to live with and loves everyone. She has produced exceptionally nice puppies for us in the past that have been successful in the show ring, as well as passing their age appropriate health clearances. Frankly, we just love her!

Meet Breeze’s new babies!
Click on either picture of the puppies below to see individual pictures of them.

The babies are less than 3 weeks old in this picture. There are 4 girls on the left side and 3 boys on the right.

The babies are 5 weeks old in this picture. There are 4 girls
on the right side and 3 boys on the left.

So who is their daddy? We won’t know until after we get the results of the DNA analysis for each puppy, which can take up to 8 weeks!  Of course we will update the website when we find out.

We would like to introduce you to Breeze, CJ and Woody. 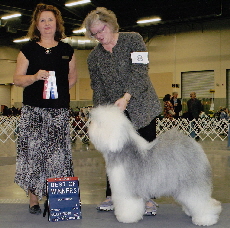 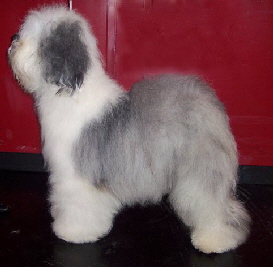 At the 2012 Euro Show we kept seeing puppies that we were very impressed with, not only conformationally, but also temperament wise. After checking the sires of these puppies in the catalog, we noticed that Woody had sired almost all of them. We were also impressed by who had bred to him with some of the most conscientious breeders in Europe regarding health and temperaments using him in their breeding programs.  We were delighted when Heike Schubert allowed us to import semen from Woody to use on our girls. 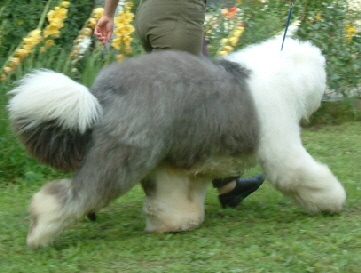 It has been a love affair with SnowDowne and CJ ever since we saw him in 2005 at the OESCA Bicentennial Show. We were impressed with CJ’s incredible head, balanced reach and drive, as well as being one of the sweetest OES we have ever met. GCh SnowDowne My Favorite Color Is Purple, Lavender Knickers at SnowDowne and London Britches at SnowDowne are all out of CJ. In 2013, Elisabeth trusted her boy with us, and sent him over for 6 months for breeding. We were so honored, thank you so much Elisabeth! CJ settled right in at Colleen’s house and loved everyone, including all the OES there, as well as every single person he met. He acted as if he had lived there his whole life. This is CJ’s nature, nothing ever phases him.